Steven Konkoly is the Wall Street Journal, Washington Post and USA Today bestselling author of over TWENTY NOVELS AND NOVELLAS.

CLICK ON THE IMAGES BELOW TO CHECK OUT EACH SERIES!

—THE RYAN DECKER BOOKS (Book 3 to be released in July 2021), a heart-pumping thriller of betrayal, revenge, and conspiracy for fans of Tom Clancy and Lee Child.

—THE ALEX FLETCHER BOOKS (5 books), a tense, thriller epic, chronicling the aftermath of an inconceivable disaster in the United States.

—THE ZULU VIRUS CHRONICLES (3 books), a modern thriller series based on the events surrounding a bioweapons attack against the United States. 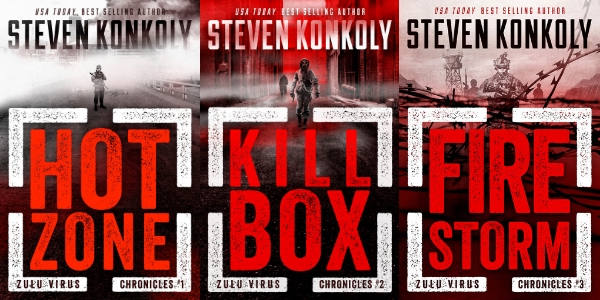 —THE FRACTURED STATE trilogy, a “24-style,” near future conspiracy series set in the southwest United States.

Steven graduated from the United States Naval Academy in 1993, receiving a bachelor of science in English literature. He served the next eight years on active duty, traveling the world as a naval officer assigned to various Navy and Marine Corps units. His extensive journey spanned the globe, including a two-year tour of duty in Japan and travel to more than twenty countries throughout Asia and the Middle East.

From enforcing United Nations sanctions against Iraq as a maritime boarding officer in the Arabian Gulf, to directing aircraft bombing runs and naval gunfire strikes as a Forward Air Controller (FAC) assigned to a specialized Marine Corps unit, Steven’s “in-house” experience with a wide range of regular and elite military units brings a unique authenticity to his thrillers.

He lives with his family in central Indiana, where he still wakes up at “zero dark thirty” to write for most of the day. When “off duty,” he spends as much time as possible outdoors or travelling with his family–and dog.

Steven is an active member of the International Thriller Writers (ITW) and Science Fiction and Fantasy Writers of America (SFWA) organizations.

You can contact Steven directly by email (stevekonkoly@striblingmedia.com) or through his blog (www.stevenkonkoly.com).